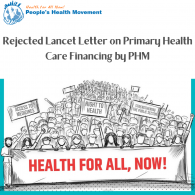 This Correspondence titled “Flawed prescription for PHC financing” was submitted to The Lancet Global Health on 21 April 2022 in response to the article titled “The Lancet Global Health Commission on financing primary health care: putting people at the centre” (published on 04 April 2022). It puts forth some of the key concerns regarding the Commission’s Recommendations. This letter was rejected by the journal and is therefore being published here. The pdf of the letter can be found here.

Subsequent to PHM self publishing its above letter, the internal response by the authors of Lancet letter to PHM was made public and can be read here.

The Lancet Global Health Commission for financing primary health care (PHC) claims to provide evidence-based lessons, putting people at the centre (1). Unfortunately, its recommendations are neither evidence-based nor people-centered because they fail to address the crucial role played by the public sector in PHC provisioning.

The Commission makes a distinction between essential public health functions and basic health interventions, erroneously presenting only the former as public goods while placing the latter under market’s purview. The Commission highlights the advantages of public financing of PHC, including low cost and greater equity, without acknowledging that private sector involvement in financing and delivery will eventually compromise both (2).

In recommending publicly-funded PHC “packages”, free at points of use, financed through capitation-based payment, within “pluralistic” healthcare systems, to ward off market failure, the Commission ignores evidence that private ownership of PHC has been a fiasco (3). The Commission misrepresents the Thailand example by overlooking the predominant role of public provisioning in expanding PHC. Additionally, it side-steps experiences of Costa Rica, Cuba, Sri Lanka and other Majority World health systems that have achieved remarkable improvements in PHC by relying on public sector provisioning (4).

The discussion of PHC financing in the context of the Covid-19 pandemic omits the price gouging and profiteering of for-profit providers and private sector contracting disasters throughout the pandemic (5).

Moreover, the Commission’s approach marginalises people-centered perspectives. Distorting and bowdlerizing critical political economy approaches, the Commission distills long-standing people’s struggles over power and resources in such settings as Kerala and Costa Rica, to questions of “social contracts” sanitized of the role of (left-wing) politics.

In sum, the Commission’s findings present (pro-private sector) ideology rather than bona fide evidence. Public funding alone will never deliver people-centered PHC unless it is publicly provided and remains free of profit imperatives.