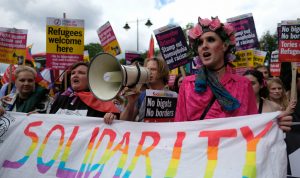 People’s Health Movement Europe and European Network Against Commercialisation of Health and Social Protection strongly condemn the ongoing erosion of refugees’ and migrants’ rights in Europe, as well as the rising criminalisation of solidarity in the region.

The arrests of Pia Klemp and Carola Rackete, the two captains operating the ships Iuventa and Sea Watch 3 respectively, who have rescued refugees and migrants at sea, are evidence of the increased repression of the solidarity mechanisms that have helped save thousands of lives. In 2018 alone, more than 2000 people have lost their lives trying to cross the Mediterranean, fleeing danger and devastation in their home countries. Had it not been for rescue vessels such as Iuventa and Sea Watch, this number would have been much higher.

Dangers that drive people to begin their unsafe journeys to Europe include war and conflict, climate breakdown, as well as a series of economic and social factors. Historically by colonial rule and currently by promoting and imposing neoliberal policies in many countries, Europe has been one of the parties responsible for the creation of such factors. European countries have fueled conflicts around the world, either by providing arms to parties involved or by directly engaging with their armed forces, primarily in African countries and in the Middle East – the regions where most migrants traveling through the Mediterranean to Europe today come from.

Also, by taking the lead in the exploitation of natural resources, bearing a great deal of responsibility for climate breakdown and impoverishment of most of the world’s population, many European transnational corporations have repeatedly put profit before the health and safety of people, ignoring or actively violating basic human rights.

In most cases, civil society has been the one vocal opponent to Fortress Europe’s uncoordinated response to migration. Civil society organisations have advocated for the basic human rights of refugees and migrants, and have offered concrete support to those arriving in Europe. Unfortunately, many EU Member States have not only introduced restrictive migration policies, but have also orchestrated repressive campaigns against civil society organisations helping migrants by introducing punitive legislation, financial limitations to their work, or resorting to outright deterrence.

Limiting the activities of civil society organisations through national laws and decrees, as pursued by the Italian Interior Minister Matteo Salvini in recent weeks, combined with the propaganda of the “closed ports”, is one of the approaches taken. This particular approach has kept Sea Watch 3 just a few miles away from the port in Lampedusa for 17 days, with about 40 people rescued at sea in need of mooring to a safe port. This is not the first such event, clearly against international conventions regarding rescue at sea.

Equally worrisome is news from other EU border-countries. Mountaineers in Croatia have reported about special police units literally hunting migrants along the border with Bosnia, applying physical violence against people searching for water. Members of the same police force have informally admitted that they regularly force migrants  who have already entered Croatia across the border to return, thus violating international law.

Finally, activists aiding migrants have been charged and fined for people smuggling in several European countries, forcing people to choose between their livelihoods and honoring a basic feeling of solidarity with other human beings.

Nowhere in the world – especially not in one of the richest regions – should we be witnessing such a crude disregard for human rights and lives. PHM Europe and the European Network call for an immediate stop to practices that criminalise solidarity around the continent, beginning with the repealment of charges brought against Pia Klemp and, more recently, Carola Rackete. We welcome the news that the latter has been freed recently, although she is still facing accusations of supporting clandestine migration flows.

PHM Europe and European Network align with the call published by the coalition Comité Européen contre la Criminalisation du Sauvetage en Mer (CECCSM). We urgently demand a regional EU migration policy that corresponds to the reality of human mobility in a globalised world, as well as to the needs and rights of refugees and migrants. We are convinced that this policy can be, and should be, rooted in a sense of solidarity and justice, rather than in the wish to protect national borders and high-income countries’ financial interests.