Coronavirus in West and Central Africa: A full-scale test for the Integrated Disease Surveillance and Response 2020-2030? 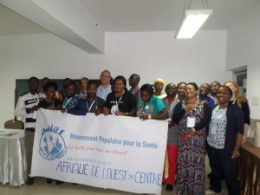 The Coronavirus epidemic that is making headlines in the media around the world has not spared West and Central Africa. 9 countries out of the 12 affected by Coronavirus on the African continent are from this region (Senegal 10, Ghana 2, Cameroon 2, Nigeria 2, Burkina Faso 2, DRC 1, Cote d’Ivoire 1, Togo 1, Gabon 1)[1], even if most are imported cases. However, there is no death so far, Senegal has even announced that two of the 10 infected people are now cured.

For some observers, the relatively low infection rate in West and Central Africa and especially the absence of death could, among other things, be due not only to the experience acquired in this part of Africa in the responds to the Ebola virus disease, but also to the low migratory flow between China and the continent.

Even if the WHO considers that it is not late to control the Coronavirus on the continent, many calls, like the one of the Senegalese president Macky Sall invite Heads of State to vigilance, to solidarity and the populations to a strict observance of the WHO’s prescriptions. Civil society, religious groups and the media also have a key role to play in addressing the issue.

The Coronavirus, which is making the news everywhere in the world, instead of uniting countries and continents by facilitating cross-border cooperation, in the face of the sudden crisis it has created, seems to favor a community withdrawal. This is bad news for the international organic solidarity.

In West and Central Africa, hatred of the stranger has escalated. Coronavirus is creating an upheaval in collective thought as countries of patients are stigmatized with anti-colonialist discourses. The wave of fake news about the disease has only complicated the situation. Trump’s ban on flights from Europe has further fed the factories of the fake news who now predict the apocalypse for Europe.

Indeed, in an intervention in a nationalist tone, the American president spoke of the Coronavirus in terms of imported virus and at the same time prohibited the entry into the United States of European nationals. Before the United States, some countries in the region such as Gabon have banned the entry of diplomats on their soil until further notice.

Meanwhile, much of Europe is confined to the Coronavirus. Italy, with more than 20% of its population living below the poverty line, is by far the most affected country with more than 12 thousands cases including already a thousand dead. The whole country is in quarantine. Other countries in this part of the world, namely France, Spain and Germany have thousands of cases each.

Many ironically suggest that Europe’s anti-immigration policy has a few more pretexts for its implementation and that centrists should now be more easily convinced on the relevance of selective migration initiatives. Right-wing movements and politicians such as the Norwegian Progress Party, the True Finns, the Danish People’s Party, the Central Democratic Union in Switzerland, Matteo Salvini in Italy, the New Flemish Alliance in Belgium are known for their anti-immigration discourses bordering on racism.

The Coronavirus does not have only negative effects. With this pandemic, African leaders will not be able to go for treatment nor do health-check in Europe as usual. What a great opportunity for political leaders who usually do not have the opportunity to enjoy the happiness of being treated in their home countries!

The WHO Regional Committee for Africa, during its 69th session held in Brazzaville in the Republic of Congo in August 2019, reviewed and adopted a new Regional Strategy for Integrated Disease Surveillance and Response 2020-2030. It is a 15-pages document aimed at reducing morbidity, mortality, disability and socio-economic loss due to epidemics and other public health emergencies. The document specifies that improving integrated disease surveillance and response is a responsibility of national governments, inviting Member States to play a technical driving role at all levels taking into account the prevailing context in each country on the social, economic and political levels, and in the fields of health and health security.

But the sudden appearance of the Coronavirus allows Member States to test their response capacities and better commit politically to invest in the effective implementation of the said strategy, and if necessary make readjustments. Already in 2018, the WHO noted efforts by countries in implementing surveillance strategies: 85% of Member States have initiated training at district level and 68% have started community surveillance while 70% use electronic systems of surveillance and response.

In 2020, after the detections of the first cases in the region, the Director General of WHO, Tedros Adhanom Ghebreyesus as well as the Director of WHO AFRO, Matshidiso Moeti indicated that there was a significant improvement in diagnostic capabilities in the region and that most countries had the ability to test the virus.

Most of the countries now have their National response plans (e.g. Burkina: 12 millions USD, Senegal: 1.7 millions USD, etc.) and are mobilizing funds for implementations.