We (PHM thematic group on Food & Nutrition Sovereignty) are writing this note to inform and update you on the concerns of Public Interest Civil Society Organisations (PICSOs) about the upcoming UN Food Systems Summit of 2021.  In this note we brief you about CSOs, Social movements’ (and PHM’s) involvement on the issue and its timeline including the recent call by the FSS secretariat for a “parallel pre-summit”. Here then, as a reaction, is a call for engagement for PHM countries and regions. 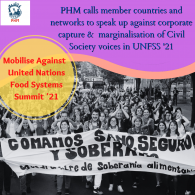 For the last couple of years, PHM (through its thematic group on Nutrition and Food Sovereignty co-coordinator) along with hundreds of other PICSOs and social movements have been participating in activities of the Civil Society Mechanism (CSM)[1] of the Committee of Food Security (CFS)[2] of Food and Agriculture Organisation. This has included frequent zoom meetings and preparation of quite a few position papers and declarations highlighting the position of participating groups and networks.

The above groups’ active participation in a UN agency (in this case FAO) is quite unique, since they do have voice and some influence there. We say ‘some’, because member states are the ultimate decision-makers and our criticisms and positions are often not taken into final account. As somebody said, ‘the technical is, more and more, excluding the political’. It also has to be said that the price for creating the CSM was the creation of a Private Sector Mechanism (PSM) with equal participation prerogatives in the debates. I do not have to tell you how this is a clear example of corporate meddling.

Before the UNFSS involvement, the CSM (with PHM) was for three years involved in the negotiations of Voluntary Guidelines of Food Systems. These negotiations were so disappointing that, towards the end, CSM set some red lines it would not negotiate on. The latter were ignored so that about a month before the Guidelines were finally approved by the member states in a steamroller fashion, CSM publicly withdrew from the process so that the Guidelines now launched do not have the backing of vast groups of the hundreds of thousand claim holders whose right to nutrition is being violated the world over.

About Civil Society’s involvement with UNFSS 2021

In 2019, the Secretary General of the UN, following a suggestion of the World Economic Forum (Davos), called for a Food Systems Summit (FSS) for October 2021. Of course, CSM (and us as PHM) got involved in this debate. If we thought that the Voluntary Food Guidelines were the result of a flawed process, discussions so far have been even worse. The mechanisms and processes set up for FSS’s preparation are flagrantly captured by corporations. Some of the key actions /engagement of CSOs in this period have been-

-The CSM wrote a letter to the Secretary General in March 2020 signed by over 400 organizations protesting; the letter has gone unanswered (Link)

This time, CSM did not even enter the negotiations; it abstained upfront and did so, not only providing heavy-weight objections, but sent out a call in October ‘20 (Link) to the entire civil sector not to participate.

In this period, all efforts by the FSS secretariat to ‘accommodate’ us were deemed totally insufficient for the reasons found in the letters above. UNFSS is calling for a ‘pre-summit’ in mid-July to fine tune the positions it is putting forward –the vast majority of which have serious conflicts of interest and paint a future for a greater role of agribusiness. (this applies to all sub-committees set up for coming up with positions).

Call for a parallel pre-summit by Civil Society

Given this fait-accompli of the above chain of events, CSM has decided to call for a parallel pre-summit for the same date. Regional committees have been set up in all geographical regions and a communications campaign has been set up. In short, all CSM members will not participate in FSS and will disseminate its own vision on food systems as in here.  Each region will agitate to denounce the real intentions of the FSS that, as said, follow corporate interests.

Call for involvement to PHM regions and countries

Apart from being involved in the above processes, as PHM, we have joined the CSM communications group for this campaign and are beginning to strategize and suggest the actions/possible engagement by PHM regions/countries. PHM’s participation in this is proposed by the Thematic group on Nutrition and Food Sovereignty. PHM Coordinating Commission will be informed about it.

Further, as part of deepening our engagement, we call on the PHM country circles and regions to support the engagement in raising the issues around the UNFSS 2021 and engaging in activities around the “parallel pre-summit” (and also beyond). As suggestions for some action we propose:

i. Identify NGOs in our respective countries that maybe participating in official food systems summit (they may also be SUN members) and communicate to /advocate with them on the concerns PHM and others have around the UNFSS 2021. The Thematic group will help with resources and Claudio has offered to participate in any skype discussions that are held with them.

ii. PHM regions can co-organise/support webinars where the issues raised around UNFSS are brought out by experienced of activists/workers from various countries. F&N group to help.

iii. PHM countries can contribute to the central call to action (link) for the 3 days parallel pre-summit.

iv. PHM countries may write to their respective government’s raising the issues around the UNFSS preferably together with other national organisations.

v. Any additional suggestions are welcome.

The thematic groups on Food and Nutrition will be happy to provide the technical support for the above. We hope to contribute positively mainly in the campaign around the values that PHM has espoused on neo-imperialism, corporate meddling in policies on big food and so on.  Please contact [email protected]

To keep track of PHM’s involvement in the issue- https://phmovement.org/health-for-all-campaign/nutrition-and-food-sovereignty/