As a result of discussions and requests in the PHM thematic circle on War and Conflict, the circle decided to commision an educational resource (a r 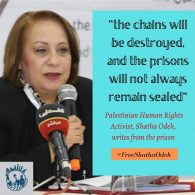 eport and a PPT) that focused on-

i.  Historical analysis of the Palestine issue

ii. How PHM’s focus on national liberation and anti colonialism has influenced PHM’s historic involvement and solidarity with the Palestine cause

iii. Comrade Shatha Odeh’s who has been unjustly incarcerated by the Israeli Occupation Forces and who on May 12 2022, was given 16 months of prison and a $9000 USD fine by an Israeli military tribunal.

You may read the full report (40 pages) below. The PPT is a shorter version of report meant for wider reach.

The educational tool is expected to be useful for PHM country circles in educating their friends on the issue and generally anyone who wants to learn on the history of Palestine cause and the PHM involvement with it. The resource has been prepared by Layth Hanbali (laythhanbali[at]gmail[dot]com) for the PHM War and Conflict thematic group.