“Now in its 5th edition, the Global Health Watch 5 (GHW5) is widely perceived as the definitive voice for an alternative discourse on health”

Since the beginning of the year, two regional launches and two country launches took place in the region as reported below. GHW 5 launches were part of a strategy to create a platform for networking, collaboration with other civil society on different health issues in the region and mobilization for PHA4. All the launches highlight some of the key issues taking places within the African region. 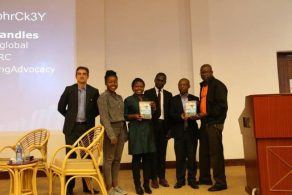 The GHW5 regional launch was a milestone for PHM East and Southern Africa marking the first regional meeting pre-PHA4 and organised as part of the international day of action on 7th April. There was also a need to discuss what the region would want to bring to PHA4 in Bangladesh as well as common issues to look at as a region. The launch took place on the 9th of April 2018 in Nairobi, Kenya. It was organised by PHM Kenya with support and in collaboration with African Population and Health Research Center (APHRC). It was attended by PHM activists from PHM Kenya, PHM Zimbabwe, PHM Uganda and other civil society organisations in Kenya. A regional PHM plenary was organised on Universal Health Coverage (UHC) and an East and Southern Africa statement and call to action on UHC was developed and disseminated.

A PHM session held immediately after discussed developing a case study based on PHM experiences in the region, with the following suggestion put forward for the case study:

*Issues around Universal Health Coverage (UHC), including risks and progress toward Health for All.
*What role Community Health Workers (CHWs) will play in achieving access, cost and availability
*Human Resources for Health as a precursor to the discussion on CHWs
*Sexual Reproductive Health Rights (SRHR)

PHM ESA committed to the following:

*The need to advocate for improved coverage of primary health care (PHC)
*Strengthen communities in addressing the social determinants of health -communities in turn put pressure on governments
*Safety in communities-primary care level. Detention of new mothers in hospitals was also discussed, with delegates agreeing that this was a human rights issue that needs to be addressed as safe delivery is one of the core minimum that must be provided to mothers. 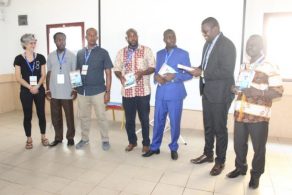 The GHW 5 was launched as part of the activities at the PHM West and Central Africa regional workshop held in Democratic Republic of Congo (DRC) from the 16th to 18th March and as part of PHA 4 mobilization. It was attended by representatives from PHM Ghana, PHM DRC, PHM Mali,

PHM Benin, PHM Gabon, PHM Europe and other civil society in DRC. Both events (workshop and launch) were covered by the Congolese national television.

You can click the following link to view more on mobilisation in PHM West and Central Africa: https://phmwcafrica.wordpress.com/blog/

Launch of GHW 5 in Ghana 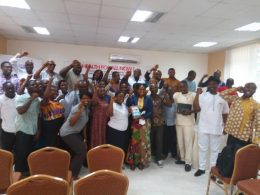 PHM Ghana celebrated and launched the global health watch 5 on the 6th of April 2018. The launch of the GHW 5 was organised by PHM Ghana and was part of the 7th April action. PHM Ghana brought together about 50 CSOs to celebrate on Ghana’s stride to UHC 40 years after independence. Much emphasis was on the National Health Insurance (NHI) as a medium to attaining UHC.

Launch of GHW 5 in South Africa
PHMSA launched the GHW 5 in early June 2018. The launch was attended by approximately 400 people. They also used the platform to launch the People’s NHI Campaign. Other platforms to be organized after the launch include commemorating PHC @40 in September and a submission on public comments for the National Health Insurance bill.

More launches planned for in Zimbabwe, Uganda, Tanzania and Gabon!