On Friday, August 3, 2018, the 5th edition of the GHW was launched at the School of Public Health of the State Health Secretariat of Rio Grande do Sul (ESP / RS), in Porto Alegre, Southern Brazil. In partnership with the School Direction and the Public Health Specializing Course Coordination, PHM activists talked to about 40 participants, the majority of them being public health students. 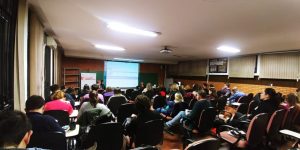 At first, the psychologist Patricia Genro, PHM Brazil activist since 2008, presented the PHM and the GHW 5. Afterwards, Mariana da Rosa Martins, PHM activist as well, presented her Masters Thesis entitled GLOBAL HEALTH STORIES: THE WORLD HEALTH ORGANIZATION AND COOPERATION WITH NON-STATE ACTORS, in which it analyzes the history of the relations of the World Organization (WHO) with non-state actors from its inception until the adoption, in May 2016, at the 69th World Health Assembly, of the Framework of Engagement with Non-State Actors (FENSA). Mariana also deepened and updated some information regarding the topic, considering what has been published in Section D of GHW5 (Watching), especially Chapter D1, Money Talks at the World Health Organization. 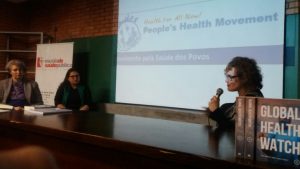 The event was one more opportunity of dialogue and reflection around the challenges to reach Health for All, especially at present times, in a scenario of dramatic dismantling of our public health system, the Sistema Único de Saúde – SUS. 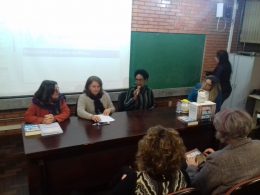