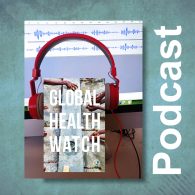 As People’s Health Movement (PHM), we are very happy to launch a new podcast series dedicated to our latest flagship publication “Global Health Watch 6: In the shadow of the pandemic” (GHW6). As a way to spread the analysis and the experiences of struggle reported in the book, the podcasts will be available for free and in all four PHM languages (English, Spanish, French, Arabic) and will cover the following themes:

People’s Health Movement produced this podcast as a great opportunity to make GHW6 content and analysis available to a broader range of people, including those who do not have access to the book for a number of reasons, and it’s also an opportunity to hear the voice of the authors themselves about the scope of the book and their analysis on specific topics.

120 authors from around the world were part of the edition of the book and now you at home, on your computer, on your phone and on different platforms will be able to listen to our analysis on a variety of issues of interest to all, not just in English, but also in Arabic, Spanish and French.

In this series of audios, we will talk about political economy, the climate crisis, privatization, gender justice, war and conflict, healthcare and other topics as social determinants of health that have an impact on people and communities’ right to health, around the world.

PHM published the sixth edition of the GHW6 with Bloomsbury and in collaboration with organizations from around the world: Medact, Third World Network, Health Poverty Action, Medico International, ALAMES, Viva Salud and Sama.

This audio series was co-produced by the People’s Health Movement and the People’s Health Dispatch. This Podcast series has been realized with the financial support of Rosa Luxemburg Stiftung and will be released every Monday, starting from January 9th, 2023.