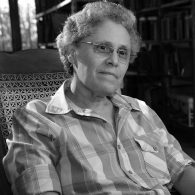 1. Who is Dora María Téllez?

Dora María Téllez captured the imagination of the world in her 20’s as she marched on Managua, Nicaragua, in 1979, commanding a column of Sandinista guerrilla soldiers toppling the 50-year-old brutal dictatorship of the Somoza family.[1]  She said she never thought she would live to see the triumph and help build the new Nicaragua.  But she did both, serving as Minister of Health from 1985 to 1990, driven by a vision of a future Nicaragua with a universal health service.[1]  After the Sandinistas lost national elections, she served as a national legislator from 1990 to 1995.[1]  She subsequently split with her former party, the “Sandinistas” (Sandinista National Liberation Front), over concerns about democracy and human rights, working with colleagues to build a new opposition party.[2]  She distinguished herself over the next two decades as a historian, advocate for women’s and gay rights, and an outspoken and eloquent critic of human rights violations by Nicaraguan government of Daniel Ortega.[2]

Former socialist revolutionary Daniel Ortega is criticized by former comrades for gradually abandoning the idealistic democratic and socialist values that had motivated the 1979 revolution.  Since assuming the Presidency in 2007, he is said to have  implemented increasingly repressive and antidemocratic measures.[2, 3, 4]  In 2018, over 300  demonstrators protesting Ortega’s policies were shot and killed.

In the run-up to the Nicaraguan national elections in November, 2021, the government of President Daniel Ortega and his wife Vice President Rosario Murillo arrested virtually all opposition candidates and prominent critics of their regime. Dora María Téllez was arrested along with at least 31 other prominent leaders,4 including Víctor Hugo Tinoco, Hugo Torres, Cristina Chamorro Barrios, Juan Sebastian Chamorro, Arturo Cruz Jr., and Felix Maradiaga.[5]  The UN Human Rights Commission denounced the imprisonments, subsequent elections, accompanying police violence, and other actions as fraudulent and abusive.[6]

Ms. Téllez was arrested in June, 2021, along with other leaders of the main opposition party, Democratic Renewal Union, known as Unamos.  The 65-year-old former Minister of Health and Parliamentarian and some 200 others were detained and charged under a new, vague Sovereignty Law for ill-defined acts that “menace sovereignty and independence.”[5] In a sham trial where neither she nor her lawyer were permitted to speak, she was found guilty the following February and sentenced to 15 years imprisonment.[7]

Since that June, 2021, she has been detained in El Chipote prison, notorious for its appalling conditions. Basic rights under Nicaraguan law are denied, such as visits from prisoners’ children, communication with attorneys, and specification of the charges for which persons are imprisoned.[4] Multiple reports from a range of sources have pointed out “inhuman conditions,”[8] lack of potable water,[4]  lack of food,[4] solitary confinement [4, 8] without reading or writing materials, and in permanent darkness.[9] She joined a hunger strike in September, 2022, in protest against conditions of isolation and lack of reading and writing materials.  Prison conditions have left her pale and emaciated.[9]

3. How does the imprisonment of Dora María Téllez impact the right to health in Nicaragua?

The imprisonment of Dora María Téllez and about 200 other Nicaraguan prisoners of conscience, members of the political opposition, obviously threatens democracy in Nicaragua,[4, 10] but it also directly threatens health. Having killed, imprisoned, or forced into exile virtually all who would speak out against abuses, the government has also threatened the health and health care of Nicaraguans in several ways.

As described above, many protesters were attacked, including many who were killed at protests.  Other who have spoken out against the government have been imprisoned in conditions that amount to torture, threatening their health and sometimes their survival. Former Minister of Health Dora Maria Tellez’ life is in danger now because of the horrifying conditions in which she is imprisoned.[4, 8, 9]  Another respected national leader, Hugo Torres, died after eight months of imprisonment in the same infamous prison. [11] The other prisoners of conscience face similar conditions.[4, 8]

The abuses against political opponents such as Dora María Téllez have also affected health in Nicaragua by reducing the number of health care workers available to care for the population.  In July, at least 80 health care workers were dismissed for treating individuals wounded during the 2018 peaceful protests.[12]  The Nicaraguan Medical Association reported that by 2019 “more than 300 medical professionals have been threatened, fired, and jailed for ignoring Nicaraguan government orders to refuse treatment of those wounded in protests;”[13] by the end of 2018, Human Rights Watch reported that the number of health workers dismissed for treating protesters had risen to over 400 .[4, 14] It is estimated that over 100,000 Nicaraguans, have gone into political exile since 2018,[3] among them at least 200 known to be doctors.[15]

The imprisonment of former Minister of Health Tellez reflects the Ortega-Murrillo government’s disregard for the health of Nicaragua’s population overall, manifesting in its handling of the COVID-19 pandemic.  In the early days of the COVID 19 epidemic, Nicaragua was notable for its lack of rational response to the crisis.  No basic public health measures such as quarantine/isolation, social distancing, or masking were ever instituted; in fact the government actively encouraged public gatherings.[16, 17, 18] Ministry of Health workers who advised social distancing or other preventive measures reported being targeted for dismissal.[14] The many political protesters still imprisoned from 2018 and 2019 were at increased risk for infection,[18] a situation that continues today with more prisoners of conscience than ever.

While the Nicaraguan government reported low numbers of cases, Amnesty International and knowledgeable scholars  reported that the official figures of morbidity and mortality due to COVID-19 were being suppressed or under-reported, making the consequences of these policies hard to document,[14, 18] although easy to imagine.  For example, Human Rights Watch reported that while the government reported over 13,000 cases and more than 200 deaths, as of September 2021, the nongovernmental organization (NGO) Covid-19 Citizen Observatory registered almost twice as many suspected cases and 4,500 suspected deaths. The government has accused the organization and critical doctors of promoting “health terrorism.”[4]

In June and July of 2020, a study in Managua found that 30% of health care workers randomly tested for the virus were infected, half of them treating patients.[19]

The Ortega-Murillo government also has damaged health by closing down over 1,900 non-governmental organizations (NGOs) that serve the poor of Nicaragua,[20] the second poorest nation in the Western Hemisphere.[13]  Many NGOs have operated in Nicaragua.   While only some delivered health services, all played a crucial role in addressing key determinants of health such as nutrition, sanitation, education, and safe housing.[21]  Starting in 2018, the government has made it harder and harder for NGOs to operate in Nicaragua,4 closing them down at an ever accelerating pace.20  By November, 2022, the Journal of Philanthropy presented Nicaragua as a case study of a dictator closing down NGOs to shut down civil society and smother democracy.  They report that Nicaragua has shut down more than 1,900 human rights, health, and other NGOs from all over the world.[20]

Given the unfortunate lack of reliable health data, [4, 8, 12, 14] the health consequences of these actions by the Ortega-Murillo government cannot be determined at a population level.  It is not difficult, however, to appreciate the likely considerable adverse health impact of these well-documented abuses and their consequences on Nicaragua.  Nicaragua is suffering.

This campaign for the release of Dora María Téllez and the other prisoners of conscience has three goals: 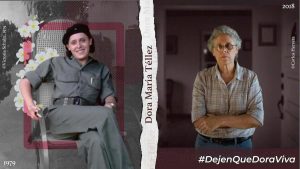 We appeal to all compassionate persons, those who care about human rights and democracy, and who are outraged by the imprisonment of Dora María Téllez and her fellow prisoners of conscience—Join us in various activities and suggest other actions:

Join us in raising public awareness:

Join us in helping raise funds:

6. United Nations Office at Geneva (October 19, 2022).  Human Rights Committee Considers Report of Nicaragua in the Absence of a Delegation, Experts Ask about the Treatment of Protesters and Reported Fraudulent Practices in Past Elections.  Downloaded 11/15/22 from https://www.ungeneva.org/en/news-media/meeting-summary/2022/10/human-rights-committee-considers-report-nicaragua-absence.

20. Martin-Morales, K. & Wilson, M. (September 30, 2022).  Threats to Democracy:  Nicaragua has Kicked out Hundreds of Nonprofits.  The Chronicle of Philanthropy.  Downloaded 12/15/22 from https://www.philanthropy.com/article/nicaragua-has-kicked-out-hundreds-of-ngos