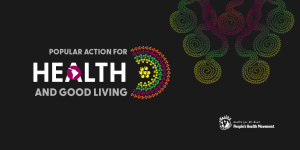 The People’s Health Movement in Latin America launches the Campaign for the transformation and decolinialization of health systems in this region of the world.

Latin America is experiencing critical historic moments and is not stranger to the global crisis related to climate change, energy crisis, wars, food insecurity, growing inequality and exploitation, among many others. At the same time,  we face the consequences of the Covid-19 pandemic with devastating effects on communities and with governments that have not given an effective and sufficient response to overcome it.

The growing social tensions have led to changes in the public agenda in the continent, where people are demanding social justice, good living, equity and equality, fair and sustainable economic model, but also for the construction of public, single, universal, integral, sovereign and solidary health systems, and against the commercialization of health.

With this campaign, the PHM seeks to mobilize civil society to create proposals for debate and influence decisions and public policies that can truly transform privatized, commercialized, segmented and inequitable health systems into public, universal, equitable and intercultural health systems, that guarantee primary health care from an comprehensive perspective, rescuing the right to health as a fundamental human right guaranteed by a State and a society that promote not only social equity but also their own cultural traditions in health, in opposition to the privatization policies of big capital.

It is then a matter of generating convergence, debate and advocacy among sectors of civil society to build a common agenda towards the transformation of health systems in Latin America.

With the images and voices of the peoples’ struggle to build public, universal, integral, solidarity-based, equitable and intercultural health systems. Both the messages and the contents of this campaign will be presented in Spanish, Portuguese and English to reach a wide audience in Latin America and beyond. This campaign has a “ToolKit” to facilitate its dissemination.

From November 19 to 25, in Salvador de Bahia, Brazil, will be held the Congress of the Brazilian Association of Collective Health -ABRASCO- in which the PHM will participate holding the Meeting for the Health Systems transformation and decolonization in Latin America and also other two scientific sessions