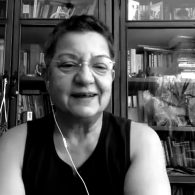 Şebnem Korur Fincancı is one of Turkey’s leading human rights activists and an internationally-recognized forensic expert. She is elected President of the Turkish Medical Association (TMA), as well as President of the Human Rights Foundation of Turkey. Dr. Financi has a long record of work against torture. Among other things, she investigated mass graves in Bosnia on behalf of the United Nations International Criminal Tribunal and has investigated deaths in detention in Bahrain, Israel and the Philippines. She headed the forensic medical department at Istanbul University until she was forced to step down because of her activism.

She is a contributor to the network of Physicians for Human Rights and has been persecuted for her work multiple times in the past. In 2016 she was arrested on charges of spreading terrorist propaganda after participating in a protest for the freedom of press. She is also among the signatories of the Peace Petition, which was supported by more than 2,000 people and faced a harsh backlash from the Erdogan administration.

Dr Şebnem Korur Fincancı was detained on Wednesday, October 26, on charges of spreading terrorist propaganda. The arrest comes after Fincancı participated in a media broadcast linked to the Kurdistan Workers’ Party (PKK) on alleged use of chemical weapons by the Turkish army against the PKK in northern Iraq. During the broadcast, she said that international law mandates an independent investigation into the events. State organs chose to interpret the statement as siding with the PKK, which the Turkish state classifies as a terrorist organization. Dr. Fincancı was also dismissed from the post of president of the TMA and it was announced that new leadership would be appointed to the association.

The TMA and its president were attacked in the media in the days preceding the arrest, including by President Recep Tayyip Erdoğan. Erdoğan stated the government was determined to accelerate the introduction of new structures in professional organizations, particularly the TMA. The offensive against the TMA included calls for the organization to be shut down and Dr Fincancı to be stripped of her passport. This was a measure taken against many activists and academics in Turkey who had signed the Peace Petition in 2016.

The Peace Petition was published to warn against violence perpetrated by the Turkish state in Kurdish regions. It was signed by more than 2,000 people, including many members of the TMA. The government reacted to the petition with a smear campaign and other repressive measures. A large number of the signatories faced prison sentences, while others were forced to emigrate. Those who stayed continued to face pressure, as was the case with some members of the TMA.

More details on what happened:

The TMA is among the most progressive medical associations in Europe. The leadership of the organization has been of progressive orientation for many cycles of governance, and they have been loud in advocating for better health care and better working conditions in the health sector. Just in 2021-2022, they held a number of strikes and actions against bad working conditions of health workers. As Turkey faced rising inflation and other facets of crisis, access to health care remains under question. TMA actions are aimed at protecting access to health care for everyone, including by advocating for reforms that would strengthen primary level care and address ongoing commodification of health.

In their actions, TMA have been open in criticizing the current government. Because of that, some media reports maintain that the move against Dr Fincancı and the rest of the association is an attempt by the current state administration to weaken their voice before the 2023 election.

Goals of this campaign are: