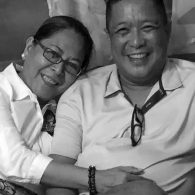 Dr. Mary Rose Sancelan (September 3, 1960) was the municipal health officer of Guihulngan City in Negros Oriental. She was also the head of the local Inter-Agency Task Force responsible for containing the spread of COVID-19 in the city. Dr. Sancelan worked in the government as a chief health officer. As a medical practitioner who previously worked in the poor and far-flung villages of Negros where health services and facilities are sorely limited, she completely understood that her primary function is to strengthen primary and community care that focuses more on preventive than curative or hospital-based approach.

On December 15, 2020, both Dr. Sancelan and her husband were shot and killed by two gunmen while on their way home on board a motorcycle in barangay Poblacion, Guihulngan City. She was the only doctor in the city with a population of more than 100,000 consisting mostly of small farmers and fisher folk. Her killing happened at the time Guihulngan City was still reeling from the effects of the coronavirus disease.

“Dr. Sancelan’s death will impact efforts to stem the coronavirus pandemic in Guihulngan. We are enraged that such an act of impunity knows no bounds even at a time when the whole nation is gripped by the pandemic. Her killers deprived the people of Guihulngan much-needed health services, especially in this most difficult time,” said the Council for Health and Development, a national consortium of CBHPs in the country, in a statement.

Bishop Gerardo Alminaza of the Diocese of San Carlos, a close friend of Dr. Sancelan calls out “Dr. Sancelan was branded, vilified, red-tagged, and now executed by the ruthless pawns of the enablers of systematic killings in this country. Her only crime…was her unselfish service to the poor people of Guihulngan – both as a barrio doctor and as a defender of the poor. “ [i]

Before her killing, Dr. Sancelan endured relentless red-tagging1 by a local anti-communist vigilante group accusing her of being a ranking officer of the underground Communist Party of the Philippines and its armed wing, the New People’s Army. She was even number one on the alleged kill list being circulated by the group. (When activists are labeled as communists by government groups, making them a target to anti-communtist militia groups.)

Dr. Sancelan was one of at least five people on the red-tagged list, including a human-rights lawyer and activist, both also killed prior (cite). Upon red-tagging, Dr. Sancelan felt helpless and trapped, “Every time I go out to work, I get paranoid. Of course, we are afraid to get killed. I am no longer free to go to the countryside to do school-based immunizations.” Dr. Sancelan was the sixth person to have been killed from the list.

Due to a strong public call for justice, the Philippine National Police claimed to have formed a special task force to probe the killing of Dr. Sancelan. But until now, the police have not released the results of their investigation, if there are any.

3. How did the murder of Dr. Sancelan impact the right to health in Negros/The Philippines?

Dr. Sancelan’s death was an immeasurable loss to Guihulngan City where more than half the population is poor (54 percent of the population is in poverty). Far-flung areas in the country, like Guihulngan, are staffed by a handful of physicians with some areas only having one physician per 20,000 population [vii]. The ratio of health providers to the population remains depressingly low: 1:27,236 for doctors, 1 to 4,852 for nurses, 1 to 5,111 for midwives, and 1 to 55,293 for dentists [viii]. Low salaries, insufficient benefits, and poor working conditions have forced many Filipino health providers to find work abroad.

Dr. Sancelan was one of the few doctors who chose to remain in their rural posts while many others have migrated to richer countries for higher wages and better employment opportunities and working conditions. Her service among the poorest and marginalized exposed her to the social realities in the rural areas where services from the national government do not usually reach the people and where inequities bear upon people’s access to health care and overall health status. She was fully aware that only by addressing the social determinants of health that the dire condition of her constituents could improve.

“At a time when everyone is placed in a vulnerable position by an evolving disease that our pre-existing health care system is struggling to contain, those who are helping people and serving at the frontlines were not spared from these attacks. This is unacceptable! Dr. Sancelan was the sole doctor in Guihulngan municipality, served 33 barangays, and headed the inter-agency task force responsible for containing COVID-19 in their region. She was one of the many health workers trying to hold our disjointed health care system together amidst the unequal capacities of local governments to do so, while the national government continues to transfer the burden of controlling the pandemic to local governments.” said workplace safety group, Institute for Occupational Health and Safety Development.

The death of Dr. Mary Rose Sancelan helps illustrate how their deaths have deprived the poor and marginalized communities in Negros of much-needed medical and health services and brought a severe blow to the people’s struggle for the right to health. The works that Dr. Sancelan and Zara Alvarez carried out are fundamental for the promotion of the people’s right to health; therefore, any acts of violence against health care providers constitute human rights violations against the population they serve.

4. The     campaign for justice for Dr. Sancelan – for the protection of health     workers in The Philippines

The Dr. Sancelan-case, together with the case of Zara Alvarez (-> add link to webpage) are emblematic of the extreme forms of intimidation and repression health workers and – activists are facing in the Philippines until today. The campaigns focus, in the first place, on justice for both assassinations as nobody was held accountable for the murders. It is, in that sense, also a campaign for the protection of health workers in The Philippines. The goals of campaign are:

The Philippine health system is chronically ill as most of its population has limited to no access to quality health care services. The national budget for health has remained inadequate to strengthen the country’s weak public health system. Only fifty percent of Filipinos have access to a rural health center within a thirty minute travel period with only thirteen percent of healthcare providers located in rural areas.[ii] more than a third of Filipinos continue to die unattended by medical professionals.[iii] Poverty in the Philippines is forever linked with poor health. The political and economic structure have caused and sustained poverty and inequality as the number of people living in poverty rose to almost 20 million or 18.1 percent of the population from 16.7 percent in 2018. [iv] The Philippines has ranked among the top ten highest number of stunted children in the world, as the rate of malnourished children have remained unchanged in the past thirty years. [v] and [vi]

The island of Negros has a long history of violence stemming from long-festering issues of poverty, landlessness, the decrease in concentration of land, injustice, and government neglect. Farmers have long fought for land rights through land reform and direct actions of land occupation and cultivation. Their struggle, however, has always been met by violence and repression perpetrated by state security forces.

Many healthcare providers have stepped up and spoken out about the miserable state of the current public health system, calling out the government’s neglect and failure to protect its people and their right to health. Health workers have promoted health campaigns and advocacies, lobbied with state authorities, and built networks and alliances to influence policy development towards one that strengthens public health, promotes people’s right to health, and addresses the social determinants of health. health professionals have joined the Community-based Health Programs (CBHP), which primarily serve the rural and urban poor communities in the country. CBHPs have taken on the struggle for the right to health, community empowerment, and social care recognizing that the health condition of any community is determined by the economic and social conditions of its people. Aside from training community health workers and looking after the health of the community, these health professionals have become part of the people’s struggles and aspirations for a better life.

Unfortunately, health workers, who are on the frontline of the struggle for the right to health, have found themselves in the crosshairs of state repression. In the Philippines, there is an increasing spate of violence against progressive doctors and health workers resulting in several deaths. Many of them are confronting different forms of harassment, such as red-tagging, filing of trumped-up charges, vilification, illegal arrests, and detention. As the country suffers from an acute shortage of health workers, the violence inflicted on the health workers will result in further deprivation of medical and health services to the people. In the 2020 pandemic, it highlighted the preexisting violence against progressive healthcare workers, while the government had tried to use the impact of the pandemic to justify gross violations of human rights and stifling voices.

As of December 2021, at least 427 human rights defenders and health workers have been killed, including Dr. Mary Rose Sancelan and Zara Alvarez who both dedicated their lives to serving the poor and marginalized communities on the island of Negros and empowering them to fight for their right to health. The people of Negros have witnessed violence inflicted on rights defenders, including health workers, farmers, church people, lawyers, teachers, and even government officials.

[vi] Undernutrition in the Philippines (worldbank.org)